Have you ever wondered, what does SMH means? The abbreviation SMH means “Shaking My Head.” It doesn’t mean “no” every time, like classic head-shaking means. But it is more like an expression of disbelief or disapproval. The term will be used oftentimes in the chat room and on social media websites.

SMH is what some would insist is an initialism, and it has been around for a while now. An abbreviation formed from initial letters”). Variants include “scratching my head” and SMDH (“shaking my damn head”).

How is SMH used? 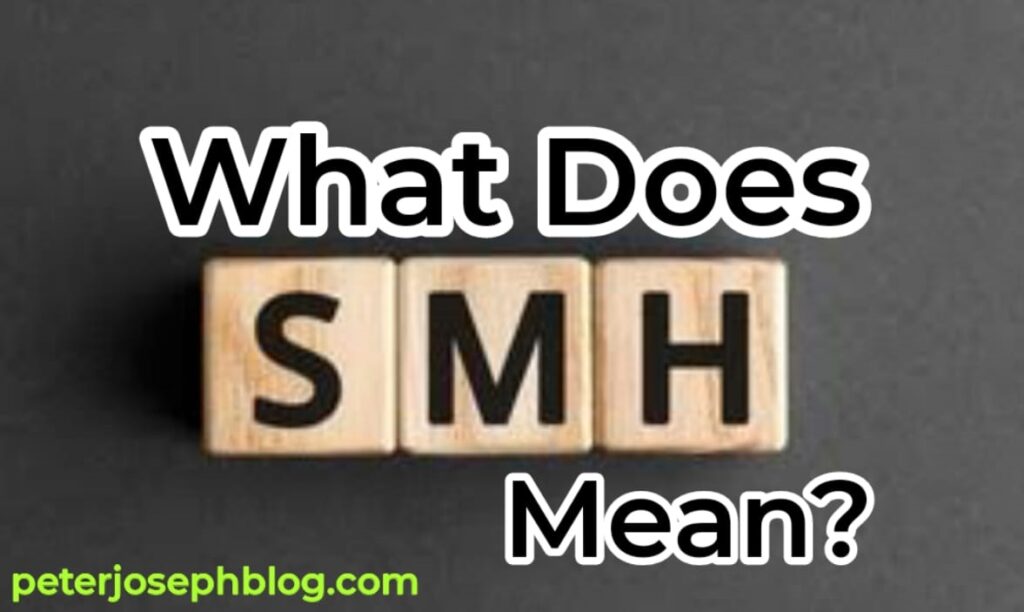 SMH is an internet acronym that stands for “shake my head” or “shaking my head.” The abbreviation is often used to express disappointment, disapproval, or disbelief in the face of what’s noticed as manifestly obvious stupidity or extreme oblivion.

SMH is used in any situation where you might actually shake your head in the real life. If you heard someone say, “I don’t use toothpaste” at the grocery store, you would probably wink a few times and move your head around in shock and revolt. This same thing happens online, an expression “SMH” can be used to communicate without typing more than just three alphabets.

SMH is a pretty straightforward initialism. But where did it come from, and how do you use it correctly?

People also suggest that SMH stands for “so much hate.” But we’re not going to say that “so much hate” is incorrect completely, but most people associate with the term SMH as “Shake my head”, so one should avoid using it for that purpose.

You should use SMH anytime while you are in the chat room or on social media websites, you might physically shake your head. There are not too many rules to this phrase; just know that it’s used to express disapproval, disbelief, disgust, shock, or disappointment.

Even you can also use it as a joke like you teasingly shake your head for a laugh in real life.

The Origin of SMH

We are not sure as it’s quite hard to trace back exactly where the term “SMH” came from. Though it seems like it first appeared on Urban Dictionary in the early 2000s (2004 to be more precise). The term began to spread online in the same year as facepalm emoji, but eventually, SMH won the race, since it reached a broader audience and is more widely used now than ever before.

SMH followed the very same path as every other trend on the internet. The first appearance most likely took place on some forum or a chat website followed by memes and GIFs, people start sending each other on messaging apps, and soon after it became a popular hashtag used on social media platforms. Today people still sometimes use SMH in texts messages, though most often it is replaced with the facepalm emoji.

Use SMH in Texting

The best way to use SMH, when the situation calls for it. If you are someone who uses instant messaging apps for day-to-day communication, you can start using the SMH abbreviation in its original text form. Make sure you use the term sensibly, otherwise people might get annoyed at your sudden change of communication style.

Use SMH in response to another person’s messages or actions, a certain situation, or an event that took place. If you feel like you can’t find the right words to express your emotions of disbelief, disapproval, or frustration, then it is the right time to use SMH.

Though, there are not any firm rules of SMH as to how it should look exactly. Here are some popular variations:

SMH is sometimes used with an additional abbreviation and not in its original form. Users add more alphabet to express a certain attitude. Some of the most common variations are as below:

How well do you use online Slang?

Many abbreviations can leave us puzzled when we see them in a text message, and SMH isn’t an exception. Whether you choose to use it in your day-to-day communication or not, knowing your online slang can help to communicate with people who come from different cultural, backgrounds, age groups, and education levels.

Do share your experience in the comments section below! Have you come across the term “SMH” before? And what other abbreviation you used most commonly while online chatting.